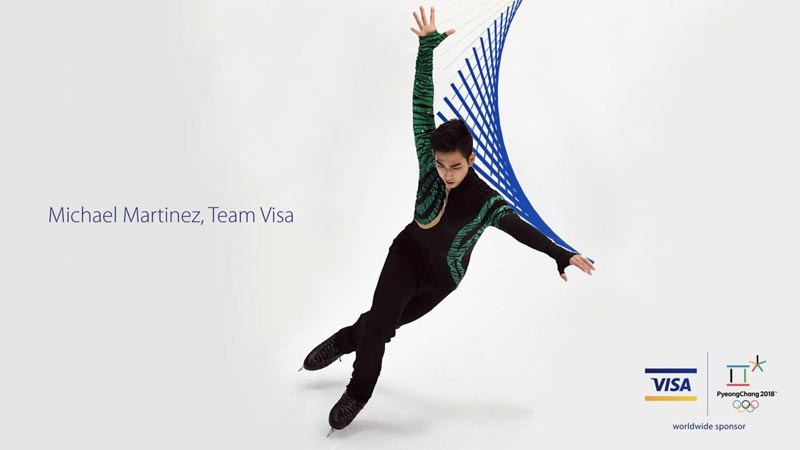 With less than one month until the Olympic Winter Games PyeongChang 2018 Opening Ceremony, Visa’s (NYSE: V) roster of Team Visa athletes took the lead in launching the brand’s full-length 60-second global advertising campaign, “Resetting Finish Lines”, across their personal social media accounts. Over the past week, all 54 members of the Team Visa roster, including Olympic and Paralympic athletes, hopefuls, and legends representing twenty-one (21) countries and fifteen (15) sports, premiered the full-length spot ahead of its traditional debut on global digital and broadcast channels to highlight their appreciation for the support they’ve received during their training for PyeongChang 2018.

Team Visa athletes including Michael Martinez (Philippines, Figure Skating) were among the first in Asia Pacific to introduce the campaign on their social channels to share their excitement leading up to PyeongChang 2018. It was announced that Michael Martinez qualified for the upcoming Olympic Winter Games PyeongChang 2018 after one competitor pulled out of the competition.

“Creating a film and inviting Team Visa athletes to be the stars and represent the Visa brand is our way of celebrating their inspiring stories and cheering them on throughout their journey. In the Philippines, we are especially proud to celebrate the news of Team Visa athlete, Michael Martinez qualifying for the Olympic Winter Games PyeongChang 2018. Everyone in the Philippines is behind him and we hope to see him achieve great success in Pyeongchang,” said Stuart Tomlinson, Visa Country Manager for the Philippines and Guam.

The film plays an integral role in Visa’s overall Olympic and Paralympic Games sponsorship, which includes onsite activations and new payment wearables. The creative thematic behind the campaign is “resetting finish lines,” rooted in the understanding that these athletes are continuously pushing their personal and athletic boundaries in pursuit of achieving their Olympic and Paralympic Winter Games dreams.

Shot by prominent sports marketing director, Stacy Wall, the film encompasses one global storyline that will be shown in more than a dozen versions across the world. The film was shot in New Zealand and South Korea, and each of the 13 versions highlight local Team Visa Olympic and Paralympic athletes using a variety of payment technologies. Localised versions include: Canada, China, Japan, Italy, South Korea, Poland, United Kingdom and the United States.

To learn more about Visa and its Olympic Games sponsorship, visit https://usa.visa.com/about-visa/sponsorships-promotions/olympics-partnership.html.

Visa Inc. (NYSE: V) is the world’s leader in digital payments. Our mission is to connect the world through the most innovative, reliable and secure payment network - enabling individuals, businesses and economies to thrive. Our advanced global processing network, VisaNet, provides secure and reliable payments around the world, and is capable of handling more than 65,000 transaction messages a second. The company’s relentless focus on innovation is a catalyst for the rapid growth of connected commerce on any device, and a driving force behind the dream of a cashless future for everyone, everywhere.  As the world moves from analog to digital, Visa is applying our brand, products, people, network and scale to reshape the future of commerce. For more information, visit www.visa.com.ph